Who are your favourites in this series? Mine are Hyoma from the Wolf Arc and Gin for sure

Hmmm for GNG my favorites are probably Benizakura, Akatora, and Gin! I also think Kurojaki is pretty cool.
Last edited by Wolpard on Sat Nov 21, 2020 6:36 pm, edited 1 time in total.

John, Akatora, and Ben~
Cool to see more wolf fans! I wish they got to stick around longer

Ohh mine from GNG are Kurojaki, Benizakura, The Kai Bros, John and Mukonga!! 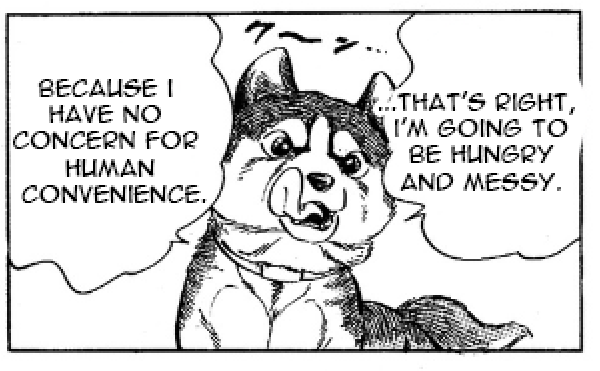 Gin: Of course! I like him even more in the manga. He's honest, eager, has a great sense of justice and knows when it's appropriate to show mercy and when to kill (unlike his son lol).

Riki: I mean, come on. He's the most epic thing in the whole Ginga-universe. Dogs weep at the mere sight of him. His Japanese voice is the manliest thing I've ever heard. Plus he's super handsome.

John: I really like his personality, though I doubt I could get along with him in person! His hunting background and his relationship with Hidetoshi are interesting.

Sniper: A really entertaining minor villain! Plus I like Dobermanns. I was glad to see him back in GDW even more badass than before.

Musashi: A handsome, dignified warrior. I wish he had a bigger role.
Top

My favorite character in gng would have to be Riki since he's the most badass character in that series. Plus he's the best Bear Hound Dad (Next to his own dad, of course

It's not often I see people who love the wolves. That's pretty cool. My favorites are Akatora, Hakuro, and Benizakura. Honorable mention goes to Moss, because he's a sweet, old man.
"Satan takes me to the pasta."
Top
Post Reply
7 posts • Page 1 of 1