General discussion of topics that encompass more than one of Yoshihiro Takahashi's series, as well as topics relating to Takahashi himself.
Post Reply
6 posts • Page 1 of 1

~
Banner made by me, sprites by GSDJohn, Dragon, and I
Top 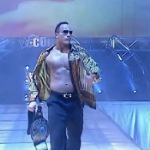 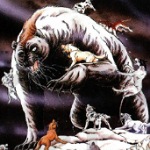 I love how Shogun is pretttyy unpopular

Same with hybrid bear. I blame no one for this.
I'll give mini reasons why I like these baddies!

10. Blue - For a long time, I've forgotten about Blue. It's thank to GDWJohn that I've taken the time to think about the character again and realize he's a really interesting mini villain we had. I actually like his set up a lot, even his death. He's only so low because of .. well, though he was a villain the whole time, he redeemed himself in the end... sooo he's a little bit less villainy than these others baddies.
9. Kurojaki - I honestly don't care too much for Kurojaki. He was boring and not the strongest... but he looked REALLY cool, so I had to put him on the list >>;;;
8. Murder S - I don't care for normal Sniper too much, but Murder S being an old veteran villain, coming back BASICALLY from the dead and as a half vengeful, half weapon old geezer is amazing LOL But, he's still pretty one note. I do like his dedication to Hougen, even allowing death if it meant getting Hougen's trust. Sniper wanted to be ruler of Ohu and was sick of being under others, but after doing it for all his life, he showed just how GOOD at it he was, if it meant getting what he wanted.
7. Genba - I hate Genba for killing the Chuutora sons, but he's pretty comical besides that. I can really appreciate that in a villain. He's stupid and hotheaded, doing so many dumb and hasty things and having to be told 'chillll' by his big bro, and yet he cares about something besides himself: Hougen! And that's pretty crazy for a character like him.
6. Hougen - Hougen annoys me for having so much plot armor and KILLING MY BOY JOHN. But besides that, he's also an amusing villain. I love his close relationship with Genba, wanting to rule as kings together, but in the end was robbed of that and his true anger shows. Genuine sadness from a villain in Ginga. This is the guy who ordered his minion to get his feet cut off and peed on his corpses. He sits on dead bodies because he's just that heartless, and honestly, I hate that a lot... I think it's only his care for Genba that made him more likeable to me, because the 'tee hee' evil characters can be hard to care for.
5. Monsoon - You might notice a severe lack of bears on this list...... yeaaaa, the bears being nothing but roars and nothing else doesn't connect me to them. But MONSOON. Is probably one of the most fleshed out villains we've gotten, that can be slightly sympathized with. He even had some interesting scenes with Sirius. I like that he started to change just a bit over time, but in the end struggled still.
4. P4 - It's such a shame that P4 couldn't be a changed villain in the end, but that adds to his tragic story. His backstory with Jerome fully builds his character so impactfully. I'm sure a lot of us acknowledge how memorable of a 'side villain' he was. Tragic villains are nice to see, especially in this series.
3. The fake Hakkenshi of Sirius - Did people forget about these guys? ewe I love these guys. They're all really cool and I wish they could have had more moments and see the full fight. I know it would have resulted in deaths... or maybe some wins, since some of the 'real' Hakkenshi died later on, but still. Love these wolf power rangers.
2. Viktor - I know I hate Hougen for his over the top evilness, and though Viktor is just as evil... I think my love for the Russian arc as well as his tactical ways was really interesting to watch. Viktor is a coward through and through, and in a way that's pretty unique for a villain. Hougen uses similar tactics of using his men as shields and chess pieces, but Viktor nonstop, never stopped strategizing. And when fighting fairly, he DID cave unlike Hougen. He's strong, but so afraid of dying and something about that makes Viktor interesting to me. ...His personality sucks though. xD
1. Masamune - Masamune. My boy. His scarf is so OP. His ninja moves are OP. His hair's beauty is OP. He can sense his traitors even when half asleep. And his honorable treatment to Gennai and his men because of their dedication was REALLY nice to see. I did enjoy seeing that trust is important to him, like the scene with Kenshin and his soldier who betrayed him. He aims to rule to settle the chaos after Ohu vanished, which is borderline a pretty good goal for once, instead of just simply ruling to rule? I like that even though he can still be cruel (ordering families to be killed and trying to kill kids), he does still have SOME hint of honor and values. He's as close as we've gotten so far of a villain who isn't only 'roar scary monster' and 'bahaha ima rule everyone just because'.

Honorable mentions:
-Masashige, Aram, Akakamakiri, and Maxim were all villains at one point but turned to good guys later on, and I love them all. I just dont want to tag them as villains because I don't like them as villains, like the list is about.
-Thousand dragon's wolf formation is AWESOME.