General discussion of topics that encompass more than one of Yoshihiro Takahashi's series, as well as topics relating to Takahashi himself.
Post Reply
18 posts • Page 1 of 1

Thinking back to a comment I replied to by Shining Sirius, I was wondering is there any ginga characters or any from the related material that you think has an ugly design?
Here's mine

THREE HEAVENLY KINGS - What was Yoshi thinking with these desgins? They don't look intimidating at all - they look like lions! I hate everything about these guys but their designs are the worst!

No picture because none with all three yet and hard to find.

MASASHIGE - I don't think his design had much facial expression to it, so it was kinda lame.

MASAMUNE - Why has he got hair on top of fur? Why does he wear a scarf and gaiters? The other dogs in his clan don't so why does he? Are you fighting dogs or are you going to a fashion show?

TENKA - everything about this characters confuses me - why does he have a fish face? Was it from the toxic fumes he was supposedly surrounded by?

PUPPY BON - those eyes... those creepy bloated eyes! So glad he outgrew them! They looked like eyes from a frog!

https://imgur.com/a/tVS1KFk
I did a Ginga dog horoscope and according my calculations, I am most like Gin! Am I lucky?

I took one of those 'Which character are you?' tests, one which happened to be Ginga related and it said I would
be most like Tesshin! I feel quite honoured!
Top

Interestingly I disagree with all of the ones said so far. I think these characters have some of the most interesting designs.

(Though I will admit, the three heavenly kings have started to look bad since Yoshi's gotten lazy with drawing their fur.) George and Masamune are among my favorites design-wise. Tenka is weird but he is kind of a weird character so its oddly fitting.

Ugly designs? Hmm. I don't know if I would call any of the designs UGLY, maybe the way Yoshi draws them sometimes is ugly (coughcough Rocket cough) but most of the characters look decent upon their first introduction imo. And with actual time put into the drawings the characters can look good.

Personally I'm not a huge fan of several of the bearhound designs because they all look the same.

Weed has a pretty boring design for a protagonist, especially since he is surrounded by characters with more interesting face markings and shapes. At least his dad has scars lol. I'm not counting the fact Yoshi colors him blue because that's totally normal in Ginga and fairly common. This of course carries over to Sirius who has the exact same design, so much so you can't always tell them apart. I think all of the bearhounds after Gin have serious design issue. Riki and Gin looked different in GNG of course, but once you get to GDW all bearhounds are just recolors.

GDWO is so known for its weird designs lol I love Masamune's look, even though it doesn't make sense.
Unsai and Tenka though.... .... no.
I also dont like Liger from the Hybrid Bear arc.
Rocket was beautiful before, but is now a hideous monster. RIP 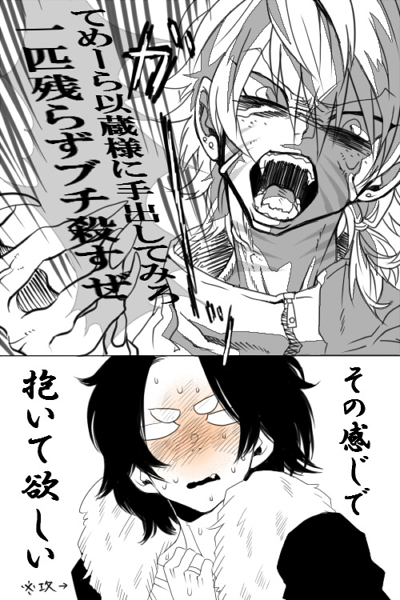 Haha, I still stand by what I confessed about finding Unsai ugly.

His 'old pervert' moments don't help my opinion of that, either.

I agree with Dragon about Liger's design too.

I wasn't terribly impressed by some of the monkey designs, such as Gozaru and Tobizaru, in Yukimura's arc.

Oh, and not really so much to do with overall design, but... Great's colouring in the anime. Why did they have to give him such ugly banana-yellow colours?

I used to like Liger's design... at least until I found out about his canonical fur color.

I know bright blue is a fairly common dog color in the Gingaverse but for some reason it doesn't work at all with him.

Gingaddict wrote: ↑
Wed Jul 01, 2020 12:15 am
THREE HEAVENLY KINGS - What was Yoshi thinking with these desgins? They don't look intimidating at all - they look like lions! I hate everything about these guys but their designs are the worst!

Me, while genuily liking their designs a lot:

But seriously, isn't Tibethan Mastiff supposed to kind of look like a lion (they have huge manes)? I think a lion-looking dog is cool, specially when it's so huge.

We are talking about ugly designs and nobody has mentioned Bemu of Satsuma yet!!
Power isn't Justice.Justice is Power!!
Top

ngl I'm kind of shocked by these answers

I find a lot of these characters listed as having the most fun designs and it's part of the reason why I love Ginga so much.

I don't like Unsai as a character, like at all (he is a creep), but I really love his design, for example.

No shame though. I'm just surprised.

To be fair, I think Bemu was purposefully designed to be ugly - that was part of the reason he gained such a fearsome reputation; he either murdered or blinded any strangers who saw his acid-scarred face.

I haatteee the designs of the bug-eyed kai ken triplets in GDWO. Their big bulging eyes and the one with the white fluffy eyebrows...
gghhh 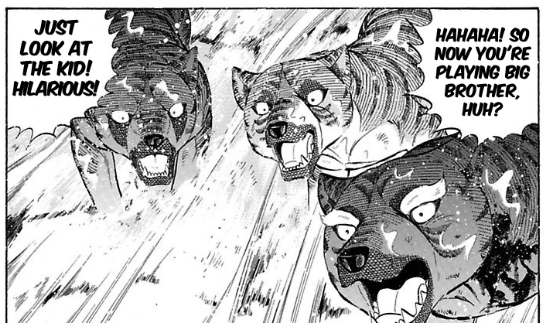 Ooooooooh! I totally forgot about them LMAO

I actually really like the one with the white brows haha.

Yeaaa LOL they were very much designed and made to be death fodder. I feel kinda bad for them.

I agree, i think the brows are cool!